In order to increase his reputation with the general public Ludo started sport sponsorships. First from 1975 to 1980 as sponsor of the Egmont Spurters Machelen of chairman Frans Van Haesendonck (pharmacist in the Sellaerstraat-Melsbroek) with as highlight the world title on the road juniors for Ronny Van Holen in 1977. From 1980 as co-sponsor of the professional cycling team Safir-Ludo. During four years, renowned professionals such as Herman Vanspringel (Bordeaux-Paris), Willem Peeters (Grand Prix Raymond Impanis) and Ronny Van Holen (Brabantse Pijl) achieve many beautiful victories on their Ludo bikes. In order to strengthen the position of Ludo bicycles in the province of Limburg, the volleyball club C & B Zonhoven, one of the three top teams in the honorary division, is sponsored in the same period. 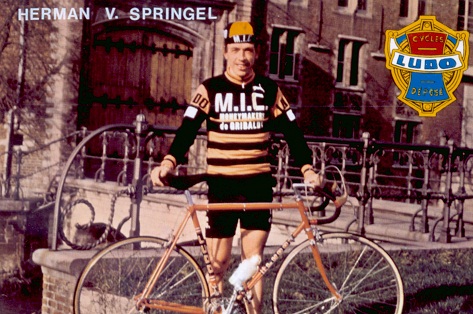